The Angora is known for its bright, blue-white wool. This color is called Red-Eyed White (REW) and is a recessive gene which removes all color from the rabbit.  It doesn’t just remove it from the wool – which is why it is called “red-eyed” since the lack of pigment in the rabbit’s eyes give them a pinkish cast.  Some people don’t like this appearance but still want a white wool. Colored rabbits often have a very pale color to their wool that can give an off-white color.  It is actually harder to find a rabbit with more color intensity than a pale one. If you are breeding and like either dark wool or light wool, color intensity is inheritable and can be selected for in your rabbits. You can see the adult color intensity after their first shear at 8-10 weeks.  The wool next to the body will be the adult color.

This young lady will have very pale wool like her cousin. 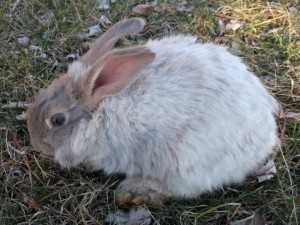 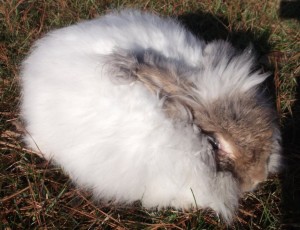